With the introduction of the Arms Deal update, CS:GO items became a hit from the start. Launched in February 2014, stickers are cosmetic add-ups that players can use to customize their weapons.

Most CS:GO weapons can only contain four stickers, except the R8 Revolver and the G3SG1, which accept five stickers each. The increasing appreciation of CS:GO items also applies to stickers, especially those associated with tournaments and Majors. 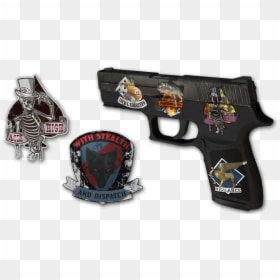 Read on for a full guide on the most expensive CS:GO stickers ever.

What Are the Criteria Used to Determine the Price of a CSGO Sticker?

If a player applies a sticker to a “vanilla” skin (stock weapon skin), it becomes part of the weapon itself, as this default finish cannot be traded. However, stickers applied to other skins become part of them.

Different aspects can determine the value of a CSGO sticker: the rarity, origin, and variant. There are five levels of rarity applied to stickers – blue (High Grade), purple (Remarkable), pink (Exotic), red (Extraordinary), and gold (Contraband).

Please note that stickers classified as Souvenir tier can only be received on CS:GO Majors. Stickers associated with specific competitions and tournaments have been priced higher.

Stickers are unlike skins with a fixed exterior quality from the start and do not degrade over time. Some players use the “Scrape” option to create an appearance of wear and tear, but it may affect the value of the sticker and the skin to which it is applied.

Please note that too much scraping a sticker will result in total removal. If you scrape a sticker excessively, you will destroy it. Another aspect of stickers is their variants.

Most come in the Normal variant, but some come in the Holo or Foil variants. These terms refer to the backing aspect (solid or paper-backed) and other unique effects.

Which Are the Most Expensive CSGO Stickers in 2022? – Full Walkthrough

Even though CS:GO stickers are purely cosmetic events, certain stickers are so valuable that they are not treated as simple in-game items. Instead, they are considered solid investments, especially with the current appreciation trend.

The Katowice 2014 tournament was the inaugural Major event. Naturally, the stickers dropped as part of this special Major are not only the rarest but also the most delightful to look at.

An old quote states “controversy is a powerful advertisement tool.” Whether true or not, all the controversy surrounding the iBUYPOWER tournament helped boost the popularity of this sticker.

With allegations involving fixed matches and unfair practices, it became the biggest scandal in competitive CS:GO. However, it affected the stickers’ price positively, as it did not stop increasing until this day.

Besides the controversy, the iBUYPOWER is a league on its own. Featuring a roaring feline beast all in red, this unique sticker shows the fearless attitude of high-level CS:GO competitive players.

Currently, an EMS Katowice 2014 Challengers iBUYPOWER sticker in the Holo variant cannot be purchased for less than $41,108.36, starting prices to $59,000.

It seems that any CS:GO item associated with Katowice 2014 is a hit, which is not surprising considering it was the first CS:GO event.

Part of the EMS Katowice 2014 Challengers series, the Reason Gaming sticker in the Holo variant cannot be purchased for less than $27,000 at best. Given the hardship to find one of these in the market nowadays, the average starting price is up to $48,000.

The best term to describe this special is uniqueness. The design features a unique design in tones of orange and yellow with an “R” letter colored in mixed tones of grey, silver, and light purple.

The price of these items might continue to appreciate due to their rarity and uniqueness but you can also find new collections that might turn into profitable investment opportunities.

While Valve Corp. will continue to add new stickers to CS:GO over time, this list is focused on the most expensive stickers at the moment of writing. Follow us and stay updated with the CS:GO market trends.