Currently, 1v1 matches are becoming increasingly popular among the CS:GO community. Depending on how long you've been playing CS:GO, always going through the 5v5 mode can get a bit too monotonous.

Read on for a concise guide on how to set up a 1v1 match on CSGO with all steps explained. 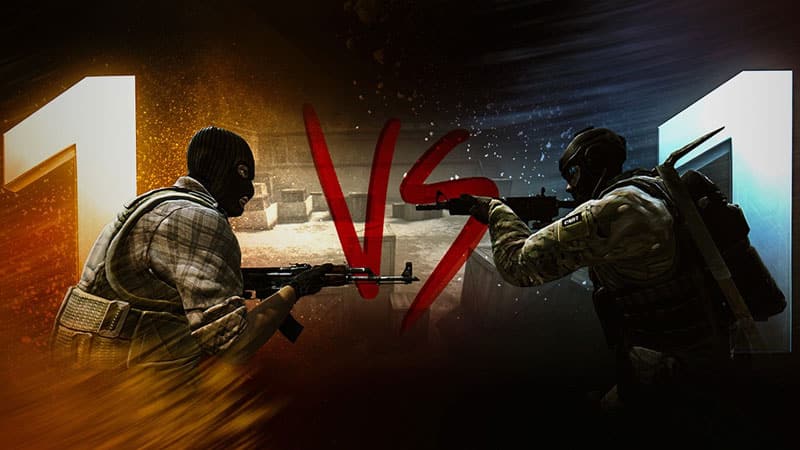 What Are the Benefits of Playing CS:GO on 1v1 Mode?

Besides scaping the eventual “boredom” of standard competitive matches, playing 1v1 mode on CS:GO can help you improve several skills. Depending solely on your own can rapidly improve your marksmanship skills, which starts with your ability to aim.

When you practice on your own, you need to be a straight-shooter as you cannot depend on teammates to save your skin in the middle of a shootout. Another important advantage of playing 1v1 is learning how to clutch.

The ability to clutch in CS:GO competitive matches can be the difference between a flawless victory or a bitter loss. Additionally, showing off your skill with your face on the fire within a 1v1 scenario can increase your respect among other players.

The more dominant your skill set is, the more respect competitors will have for you. Last but not least, there’s the adrenaline aspect. If you are a fan of CS:GO matches that raise your heart rate and make you sweat seated in the chair, 1v1 duels will surely make you satisfied.

You can find several methods to create a 1v1 game on CS:GO with quick research on your favorite search engine. This is a basic method that can be used by anyone regardless of experience with CS:GO modes.

This method requires you to download a map, start the match normally, and then add the required commands to the developer console. Let’s take a look at each step involved in the process:

After choosing with which friend you want to battle on CS:GO, the first step is to choose and download the scenario in which the combat will take place. Playing 1v1 on standard tournament maps can take too long for a final stand, so we recommend a custom aim map like:

All you need to do is to visit the Steam Workshop and use the search engine to find the maps recommended above. Once you’ve found a map, you just need to click on “Subscribe” to add it to your account.

Once you’ve subscribed to the training maps, the next step is to create a 1v1 game. As expected, you need to launch a private server where only you and a friend can participate.

After the match is finally on, you can start adding the commands using the developer console.

The last step to complete is to add the required commands for a proper 1v1 CS:GO combat, which will change the gameplay mode and set up the number of rounds, the time per round, freeze-time, free Kevlar, and other aspects.

A valuable tip is to use the “sv_cheats 0” command immediately after the game starts to avoid the usage of unfair commands.

This concise guide just taught you how to set up a 1v1 match on CS:GO by following a set of easy steps and why playing 1v1 matches can help to chisel your skills.

The whole process can be completed within a few minutes. If you are willing to start right now, invite a friend that also plays CS:GO and follow the steps described in our guide to set up a 1v1 match.