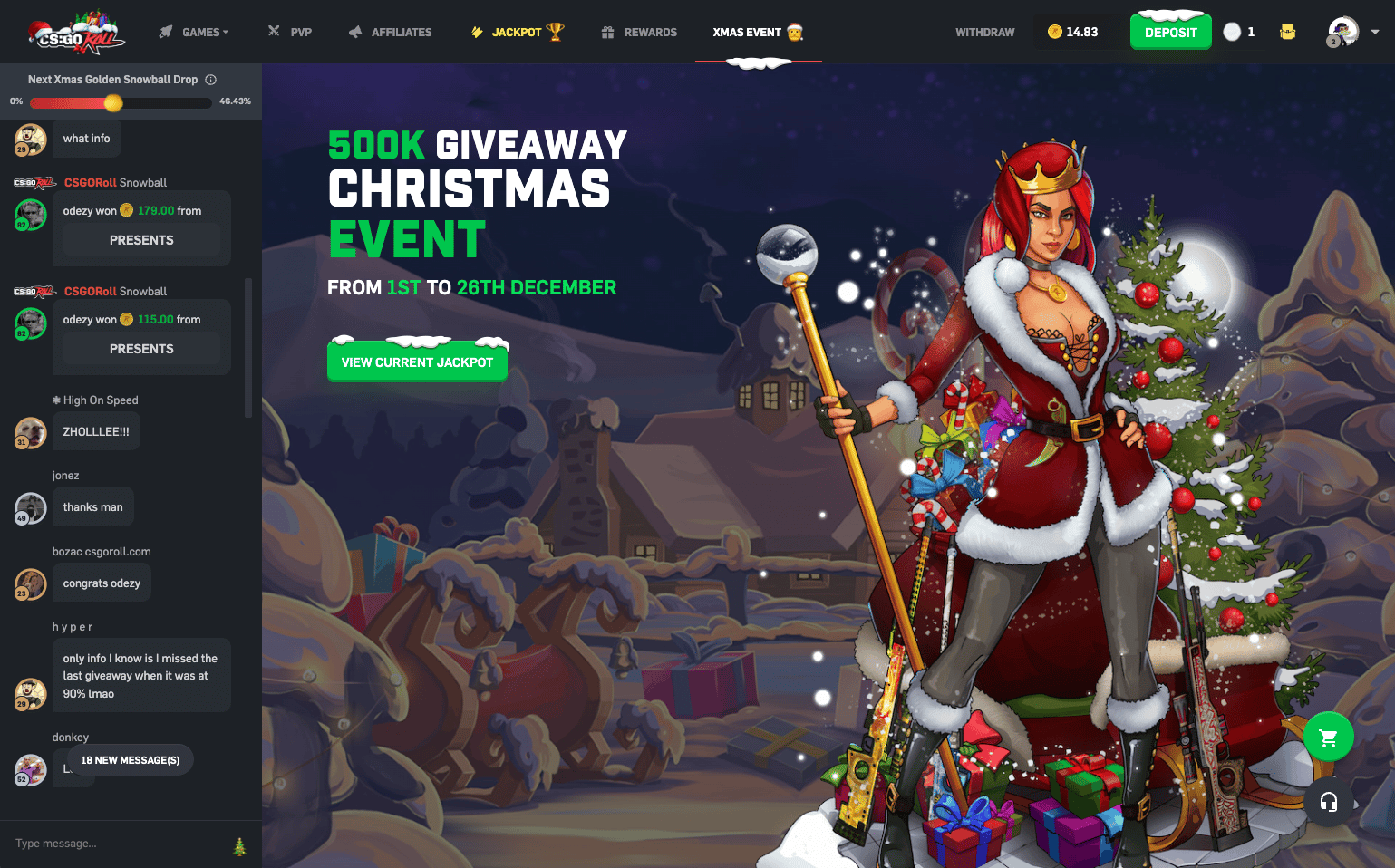 Once again, CSGORoll is ready to give you all lots of free coins during their new 500K Christmas Giveaway. With a massive Jackpot of up to 300K in coins, an exciting Winter Tournament with 1000s of coins in prizes, and giveaways during live streams, you cannot afford to stay behind – come with us to learn how to get your share of this fantastic promo!

Be sure to claim the CSGORoll 5% bonus code using our page here; you’ll be able to get 3 free cases!

We can already smell Xmas in the air, and CSGORoll has taken the lead by renovating their entire website with a Christmas theme. And they have also transformed the traditional Gems into Snowballs – once again, because it’s Xmas and we all have reasons to celebrate… especially when these Snowballs can be the key to win up to 50K coins – let’s show you how!

Get Your Spot in the Exclusive Snowball Leaderboard

Now that Gems have been converted into Snowballs for this 500k Christmas Giveaway, you need to collect as many of them as possible to get into the Top 10 of the exclusive Snowball Leaderboard.

You can collect all the Snowballs you can until December 26th, so you get a grab of the massive lot of 100K coins that CSGRoll has assigned for this activity. Here’s what you could win depending on the spot you reach in the leaderboard:

There’s going to be a fiery competition, but it will be worth it because you can get up to 50K coins if you happen to grab the spot #1 in the ranking.

You should act NOW, because the leaderboard is moving up quickly – because the collector number #1 has already obtained more than 3,000 Snowballs. And considering it started today (December 1), those are big moves and you cannot stay behind – join the fun now to claim your part of the 500K Christmas Giveaway!

How to Win Snowballs To Get into the Ranking of the 500K Xmas Giveaway?

All you have to do is to play your favorite games at CSGORoll, and you will win Snowballs. The more you play, the more slots you will climb on the leaderboard. Now you have a solid reason to wager more at CSGORoll, because you have the chance of converting all of that time into a solid stash of cash.

Watch out for Golden Snowballs

Want to stay ahead of the curve? Then it would be best if you collected Golden Snowballs, aka the quickest way to get into the Top 10 of the Snowball Leaderboard. Every single one of these Golden Snowballs is worth 100 normal Snowballs, so you can see why it’s an excellent idea to focus on collecting them… but how can you do it?

To collect Golden Snowballs to grab a fair share of the 500K Christmas Giveaway, you have to take part in any of these 3 activities:

So, now you have enough info to craft a plan to climb the Leaderboard and get yourself a huge prize of coins that you can cash out or wager to win even more!

The Winter Tournament of the 500K Xmas Prize

The players participating in the Winter Tournament have already been selected from a list of interested participants from 16th Nov to 20th Nov 2022. CSGORoll has formed 16 teams that will battle each other in 5v5 CS:GO matches, with the sole goal of winning the massive prize of the tournament.

Here’s the itinerary of the Winter Tournament so you can watch the matches:

For the Grand Final, there’s a consolation prize of 4,000 coins.

Based on this, the team that makes it to the Grand Final and wins the Winter Tournament will earn a total of 19,000 coins!

Just like in the Summer Tournament, CSGORoll might enable other users to participate by supporting their favorite teams and/or placing bets – but that’s something we’ll update when the platform officially releases it.

The Jackpot of the CSGORoll 500K Christmas Tournament

And finally, we have the huge Jackpot of this Christmas event. With a total of 300K of coins in prizes, you can win a share by collecting as many Jackpot Tickets as possible… But how can you win such tickets? Simple: Spend your Snowballs in the Snow Shack.

The Snow Shack is a store of special CS:GO cases – where the currency are Snowballs (both conventional and Golden). You can buy special Xmas Cases for as low as 10 Snowballs, or as high as 10,000 Snowballs – so you can win exclusive skins.

All you need to do is to spend your Snowballs on the Snow Shack to collect tickets, because whenever you do, you’ll be automatically registered in the Jackpot by CSGORoll. Just make sure to follow this itinerary, so you can spend all of your Snowballs on time:

CSGORoll will select the winners (randomly) during live streams on their official Twitch Channel. Just make sure to follow the indications and join the live streams to find out if you won your share of the Jackpot.

Now that you know everything that this exclusive promo has to bring you, don’t wait any longer and join the fun today! 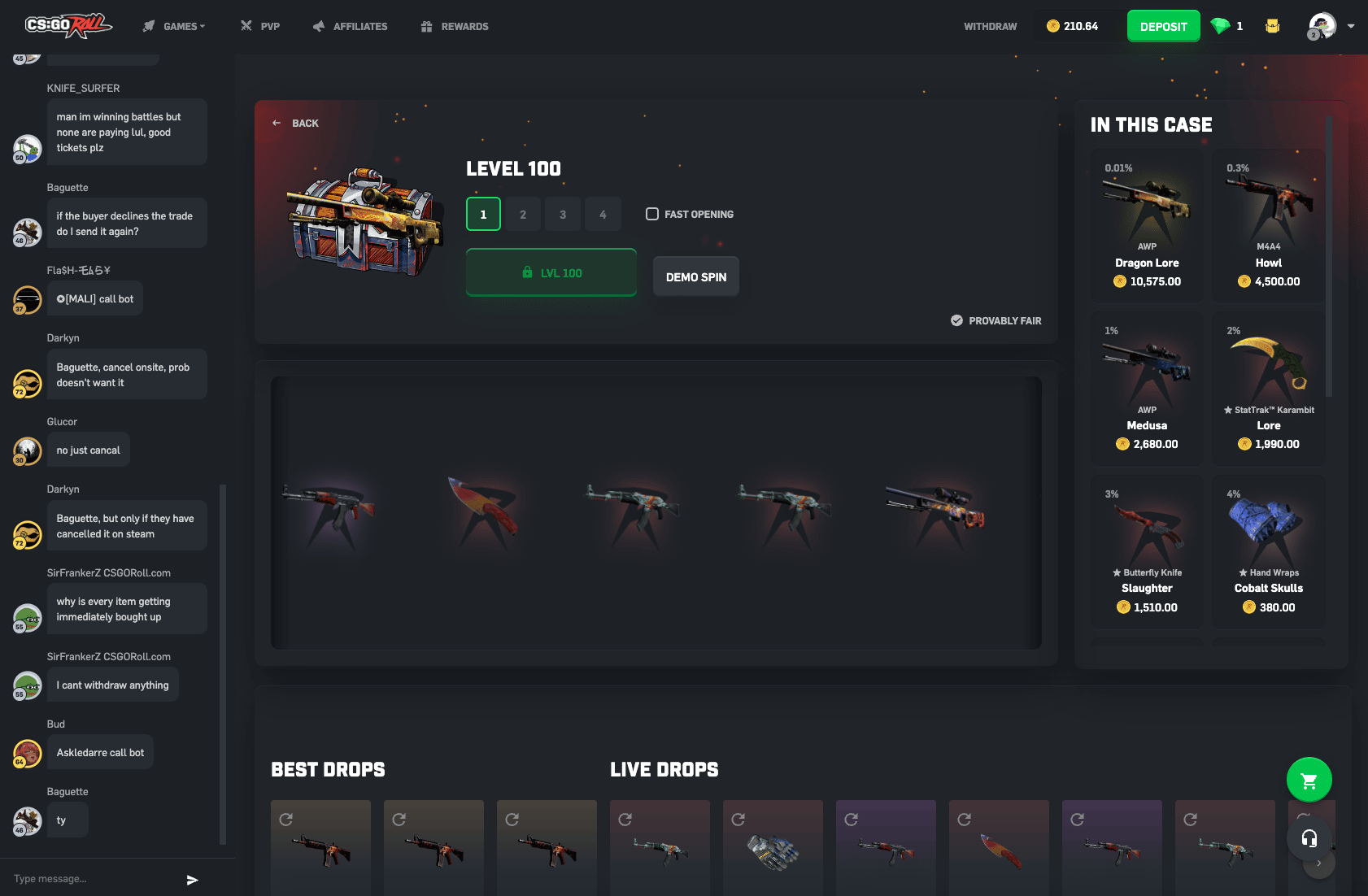